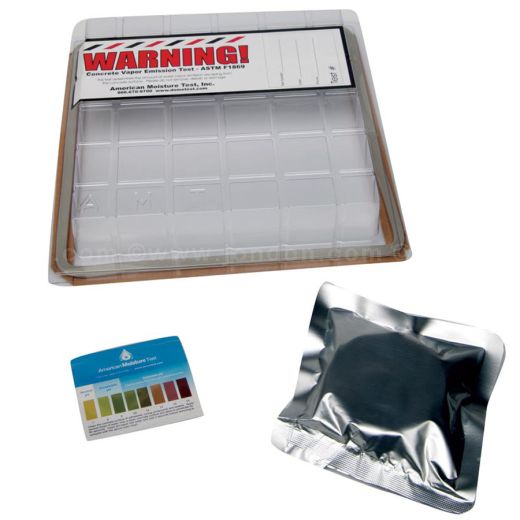 The AMT Calcium Chloride Moisture Test Kit is the simplest and most effective product to gauge the moisture level in both existing and future flooring locations. These test results will enable you to determine if remedial or preventative measures are required to avoid expensive repairs thereby insuring ultimate longevity of your flooring solutions

Uses
This concrete moisture test is used to collect the water vapor emission escaping from a concrete floor. The test is set on the floor surface for 60 to 72 hours and used to verify emission levels from the concrete.

The results are comparied with the moisture emission levels each floor covering, coating, patching and primer manufactures requires before the products are installed.

Test History
Developed by the US Rubber Manufactures Association (RMA) in the 1950’s, this test method was released as ASTM F1869 in late 1998 and remains the most widely used test method for testing.

Limitation
All concrete substrate testing requires temperature and humidity of the building to be sustained for accurate results. Results obtained before a controlled environment is achieved may be used for reference only, with future testing to be performed under ideal conditions. Do not install near windows or direct sunlight.

Building Conditioning
Begin testing at the same temperature and humidity expected during normal building use. If this is not possible, ASTM F1869 allows for test conditions to be 65ºF to 75ºF and 40% to 60% relative humidity this needs to be maintained for 48 hours prior to and during testing. The use of a temperature and humidity data logger may be used to verify conditions during testing. Contact our technical department for details.

Test Area/ Preparation
Clean a 20” x 20” area free of flooring, coatings, patching cements, adhesive residue and expose a clean concrete surface. To speed the process, a dustless grinder may be used to clean the surface. Do not use acid etching, water, strippers or clean sweeping agents.

Test Duration
Protect all test sites from damage for 60 to 72 hours.

Results
The final test results are reported as a quantity of moisture expressed as the weight of condensed gas (liquid) in pounds that is emitted over 1,000 ft² area during a 24 hour period.

Flooring and Adhesive Requirements
The industries most stringent vapor requirement is 3.0 lbs. or less. Verify each manufacturer’s tolerance before installation of the flooring product.

Open the sealed bag containing the calcium chloride canister. Weigh the canister with the black tape seal using a gram scale with a gradation to 1/10th gram.

Note: Be sure the scale is set to grams. Ounce scales will not work for this test. Starting weights are around 30 to 31 grams, but may vary slightly. The scale we provide can be calibrated if desired. However, the main concern in weighing this test canister is using the same scale when you first weigh the canister as when you post-weight it. The overall gain in grams is the most important factor.

Record the starting weight, date and time you start the test on the canister lid and on the back of the worksheet provided with the test kit. The most important factor is determining the gain in grams from the start to finish of the test and the hours it was exposed.

American Moisture Test provides a useful worksheet that can be easily photocopied for proper documentation.

Peel off the white protective backing tape from the dome sealant material and discard it. Be sure the sealant material does not contact objects or clothing as it is very sticky and is intended to provide a secure, long lasting seal to concrete throughout the duration of the test.

CAREFULLY remove the lid. Do not spill the crystals. Place the lid under the dish as shown.

Immediately place the dome unit over the center of the dish unit. Always be prepared to place the dome over the dish as soon as possible after opening the dish. Press down firmly along all the edges of the sealant material to securely bond the unit to the floor. A properly sealed dome will have the outside flange touching the floor. Put a slight amount of hand pressure on the center of the dome to ensure it is not leaking air

Allow the test to remain undisturbed for 60 to 72 hours. Once the test is placed into service it must not be disturbed by foot traffic or allowed to be exposed to direct sunlight. If accidental bumping occurs and the seal is not broken or the crystals inside spilled, the test may still be useable. If exposed to sunlight it will bias the test and produce inaccurate results. The use of protective cones is a good way to draw more attention to the test kit. It is a good idea to inform people that this test is sensitive and may have to be re-conducted if disturbed or destroyed.

Recover the dish after exposure and calculate the results. At the end of the 60 to 72 hours of exposure, carefully open the dome with a razor blade and reach inside to retrieve the dish without spilling the calcium chloride. The used dome and sealant can be safely removed from the concrete with a razor scraper later on.