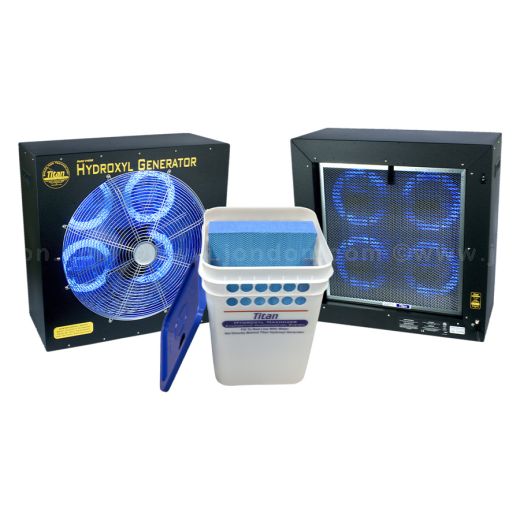 The Titan 4000 Hydroxyl Generator is perfect for use on big restoration jobs affected by severe odors. It produces no ozone, and is safe for use in occupied areas. The Titan 4000 treats up to 40,000 cubic feet—four times more than the original Titan 1000!

On jobs where time is of the essence, or in environments where complete evacuation isn't  possible, the Titan 4000 is the perfect choice.

The Science of the Titan:

This state-of-the-art system sends UV rays (365nm) (emitted from a TiO2 photo-catalytic lamp) through an anatase-coated glass sleeve to trap huge amounts of titanium dioxide. Next, electron hole pairs form and react with water and oxygen, producing free electrons and hydroxyl radicals that, when dispersed by a fan, literally convert organic and inorganic gases and air pollutants into carbon dioxide and water.

Translation: Stinky air is safely neutralized and your customers don’t have to leave the building!

NOTE: It takes the Titan 4-8 times longer than ozone technology to effectively neutralize odors. You may think the Titan is not working at first, but just be patient. When the machine is running, you will not smell any ozone gas odors - and neither will your customers

Double and Even Triple the Odor-Destroying Power of Your Titan Hydroxyl Generator!

The Titan Hydroxyl Maximizer is designed to boost the performance of any Titan Hydroxyl Generator, speeding up the production of hydroxyl radicals for odor removal that's 2 to 3 times faster!

Hydroxyl generators create a reaction between UVA, TiO2, and water vapor in the air to create hydroxyl radicals. Water molecules (H2O) are broken apart to create a single hydrogen atom (H) and a hydroxyl radical (OH). The hydroxyl radical disperses into the air, deodorizing, oxidizing, and completely deactivating airborne malodors. Unlike ozone, this method of odor neutralization is 100% safe for use in occupied areas.

Higher humidity levels (meaning more H2O in the air) results in increased hydroxyl radical production. And the more hydroxyl radicals there are, the faster odors are destroyed.

When faced with removing malodors on water damage restoration jobs, however, increased humidity is the last thing you want to do. Which is why the Titan Hydroxyl Maximizer is the perfect solution for those jobs where evacuation is not possible, but time is of the essence.

The Maximizer sits directly behind the intake vents of any of the Titan models and injects cold water vapor. It essentially feeds it extra water vapor to boost the production of hydroxyl radicals, making your hydroxyl generator more efficient.

And, since the water molecules are broken apart to create the hydroxyl radicals, you don't have to worry about the Maximizer adding to the humidity in the room. In fact, when the intake humidity was measured and compared to the exhaust humidity, there was a 15% to 40% drop in the humidity level.

The Titan Hydroxyl Maximizer will hold enough water to run for 4 to 5 days, so you don't have to worry about constantly refilling it on a daily basis.

Odor removal through this method becomes so efficient, you'll find that stubborn odors are removed in half the time!

Here's what our customers have to say...

"Working in the restoration world, we are always looking for new technology to make the restoration experience easier for all. We have purchased several Titan 4000s and Titan 1000s. They are working wonders for us, from being able to keep victims of small fires in their home to making working in the same fires easier on the techs. When it comes to processing contents, in the past we could only deodorize overnight when no one was around due to irritants associated with  ozone. Now with the completely safe Titans we can process all day, doubling the amount that can be done."

*In California, this unit is for INDUSTRIAL USE ONLY